Saint Petersburg is filled with some fantastic art, culture and museums. However, a beautiful piece of art jewellery that’s in focus of many visitors to Russian cultural capital are Fabergé Eggs. You can read here about the history behind them and where to see Fabergé Eggs in Saint Petersburg.

The history behind Fabergé Eggs

*This is a guest blog post written by Alexandra and Karina, local Saint Petersburg art and history experts. You can read more of their stories and check out some beautiful art tours they are organising on a link here.

If the diamonds are the girls’ best friends, the best friends of gems are jewellers. It is they who make the eyes of women all over the world sparkle with joy and excitement. Who are these magicians – skilful craftsmen or artists who create the works of art that are small in size, but not in significance? 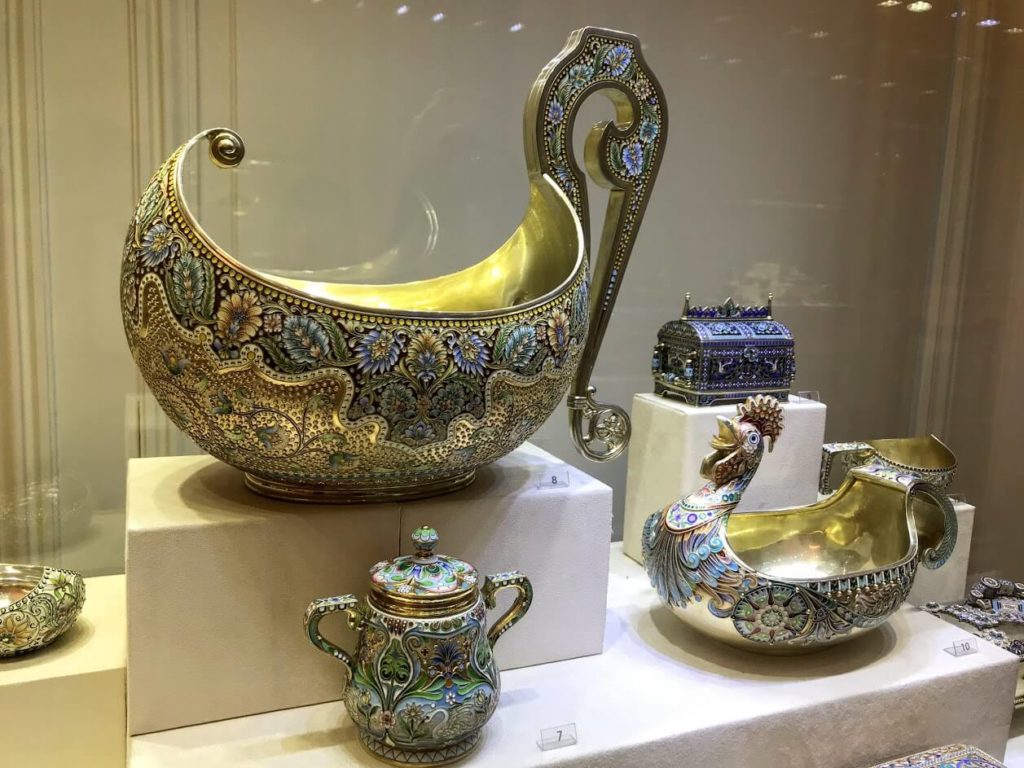 The House of Fabergé

Among such magicians, the name of Carl Fabergé stands out. The works created by his company have become the relics of royal families and collectors all over the world.

Today everyone knows about the famous Imperial Easter Eggs Collection created by The House of Fabergé for the Russian royal family. But in reality, the heritage of Fabergé is much broader.

The House of Fabergé was founded as the jewellery company in 1842 by the father of Carl Fabergé, Gustav. And it quickly became internationally renowned. 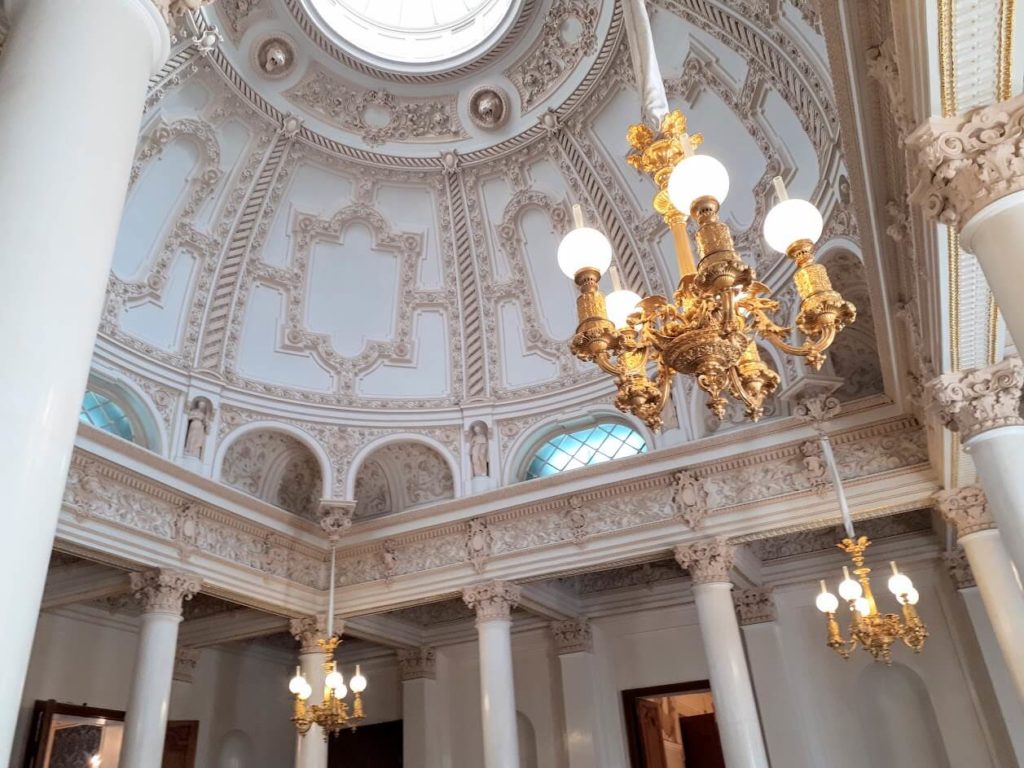 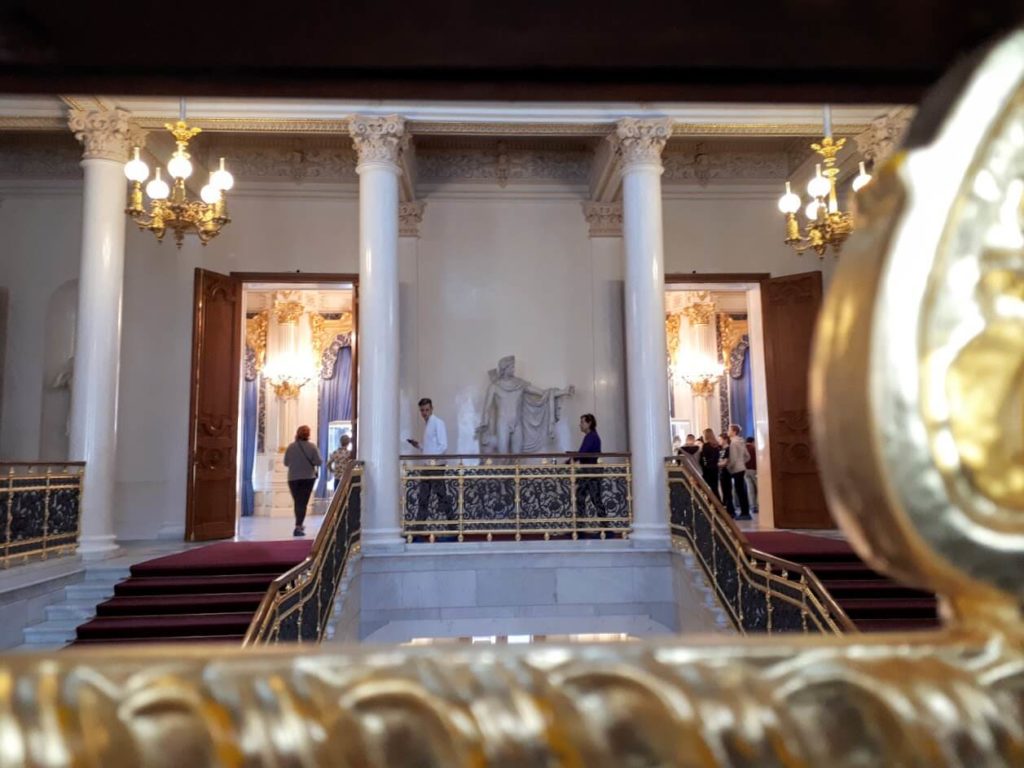 Carl Fabergé as a young jeweller

Carl Fabergé had French Huguenots and ethnic Germans as ancestors on his father’s side, while his mother was Danish. He was born and bred in St. Petersburg, then the capital of the Russian Empire. Although he didn’t have Russian blood in his veins, throughout his entire life, he considered himself a Russian artist.

When Carl turned fourteen, he graduated from the Lutheran St. Anna School (also known as Annenshule, located on Kirochnaya street 8a). His father then sent young Carl on a long European journey, where he explored the magnificent jewellery collections in Paris, Frankfurt, Dresden and Florence.

Carl returned to Russia after four years and started to work at his father’s workshop. Three years later, the Office of His Imperial Majesty Alexander III bought the first jewellery made by the young master. 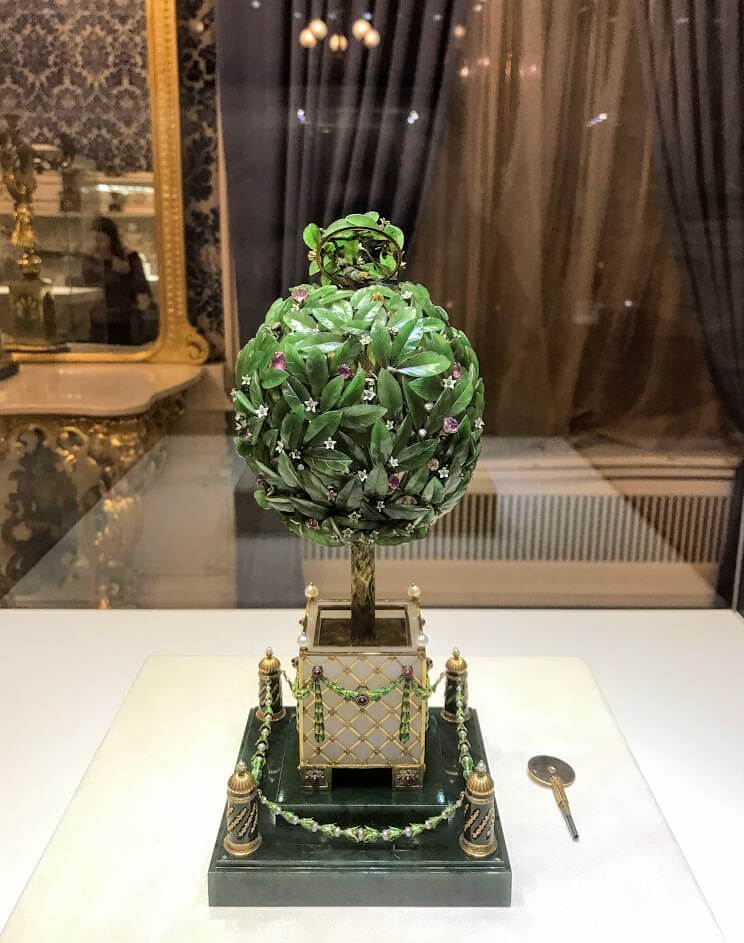 Taking over the House of Fabergé

In 1872 when Carl Fabergé was only 26, he became the head of the family business and soon made it famous worldwide. The popularity of the brand and the income were proliferating. But, Fabergé never rested on his laurels and continued to improve his skills and develop the family workshop.

He was among the first jewellers to introduce the jewellery series. Clients could gradually buy each statuette or other pieces of art from specific collections.

The idea uniting all the products in the House of Fabergé wasn’t the price, but the quality and skill of their execution. They say that the items that did not meet the strict standards of excellence were destroyed. All unsold samples were sent for re-melting at the end of each year.

As Carl himself once put in an interview:

I am not a trader, I’m not much interested in an expensive piece, if its price is defined only by a number of diamonds or pearls put in it.

The value of the finished product, according to the jeweller, should have exceeded the cost of precious materials. In his works, the master used such non-standard materials as steel and tin. He introduced brooches from Karelian birch decorated by precious stones into fashion. 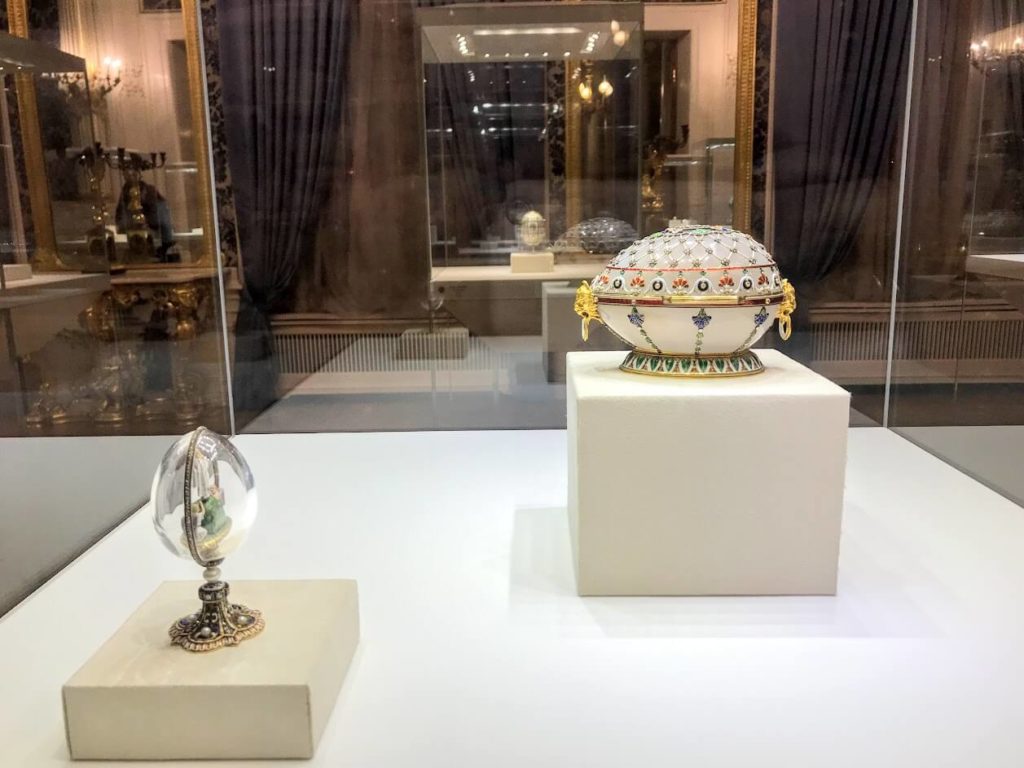 Fabergé at the Hermitage Museum

Carl Fabergé had been working as the restorer and appraiser in the Hermitage Museum for 15 years. That position had a significant impact on the development of his personal style. It is not clear how he received this position but what we know is that he worked there absolutely for free.

On the other hand, having access to the Imperial Jewellery Collection gave him invaluable experience. He learned the secrets of his predecessors and technical methods, including the ancient technique of guilloche enamel on an engraved background. That following method earned special fame for his workshop. Enamels soon became the trademark of Fabergé style. Craftsmen of the House of Fabergé could create glazes in more than 100 tones.

⤷ Read more about the Hermitage Museum in my post here 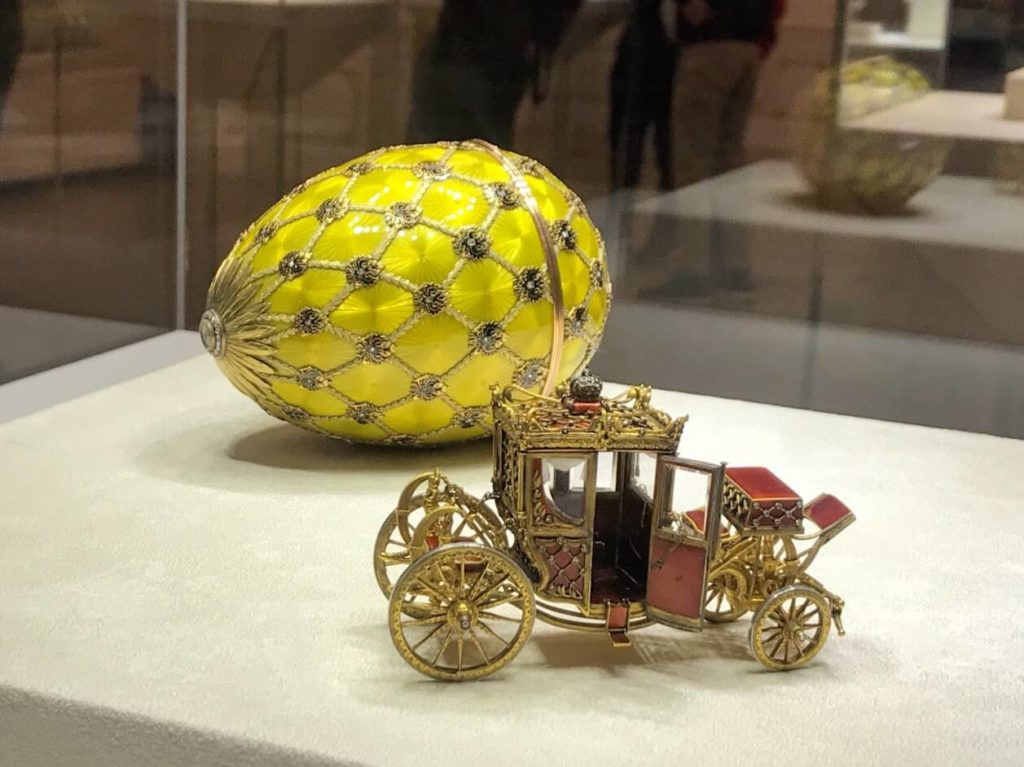 Fabergé Eggs at the Fabergé Museum in Saint Petersburg

In 1885 Fabergé received the official title of the supplier of the Imperial Court and his company became the most significant jewellery house of the Russian Empire.

Fabergé’s most significant project was a series of Easter Eggs, commissioned by emperors Alexander III and Nicholas II, and annually presented to their spouses for Easter. Each of 52 (or 54 according to some sources) Imperial Eggs produced by Fabergé and his craftsmen are truly jewellery masterpieces. Nine of them are currently on display in the Fabergé Museum in St. Petersburg.

Fabergé Museum in Saint Petersburg was opened in 2013. It’s located in the luxurious interior of the Shuvalov Palace. The highlight of the collection is Fabergé works bought by Russian entrepreneur V. Vekselberg in 2004, from the heirs of Malcolm Forbes. Those Fabergé Eggs and other precious items were returned to their motherland after almost a century of absence. 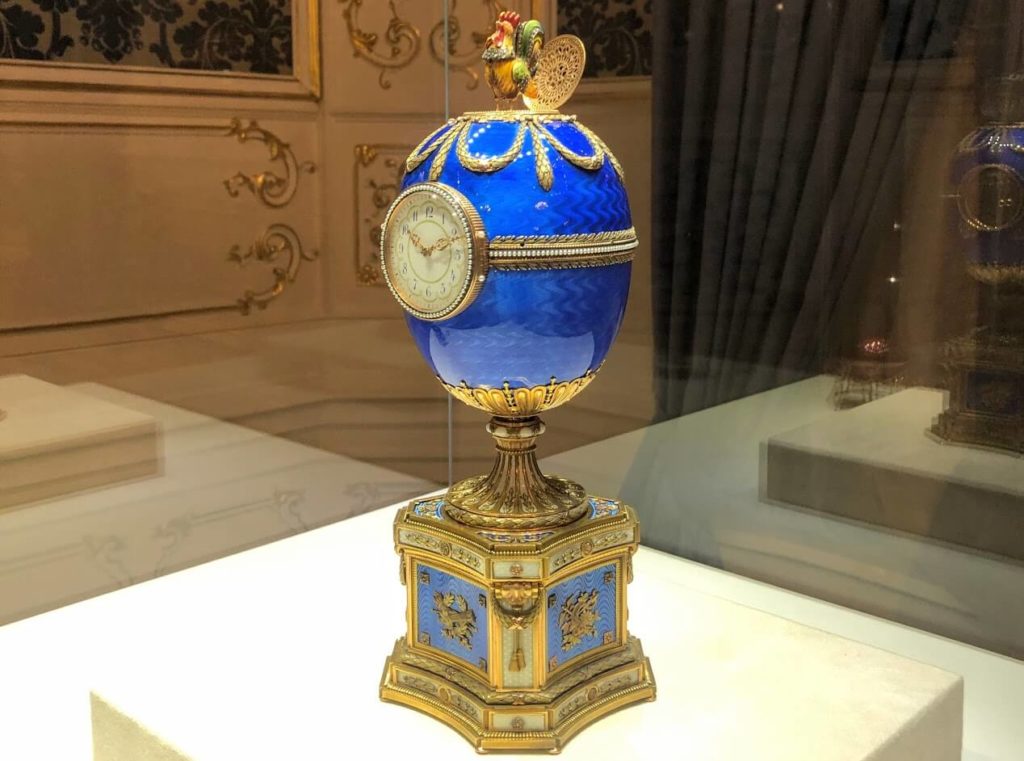 The first Fabergé Egg was ordered in 1885 when emperor Alexander III decided to surprise his wife with a special gift for Easter. Empress Maria Fyodorovna was so impressed by it, that it started a tradition of ordering eggs for Easter by the Russian Emperors.

They personally approved the sketches of eggs, and their only requirement was to create some kind of “surprise” inside each of them. Those surprises were usually associated with important events in the life of the royal family, such as the coronation, birth of an heir, anniversaries etc.

The House of Fabergé created one egg per year from 1885 until 1895 for empress Maria Fyodorovna. And starting from 1895, the year of the coronation of Nicholas II, and until the Russian Revolution of 1917, two eggs per year for empresses Maria Fyodorovna and Alexandra. There was a pause during the Russian-Japanese War in 1904-1905 when no eggs were presented or produced.

Imperial Easter Eggs by Fabergé quickly gained immense popularity, and other wealthy clients in the Russian Empire and abroad started to order similar gifts. Among them were the Duchess of Marlborough, Rothschild family, Russian noble family of Yusupovs and industrialist Alexander Kelch.

*TIP: You can see eggs commissioned by the Duchess of Marlborough and Alexander Kelch on display in the Fabergé Museum in Saint Petersburg. 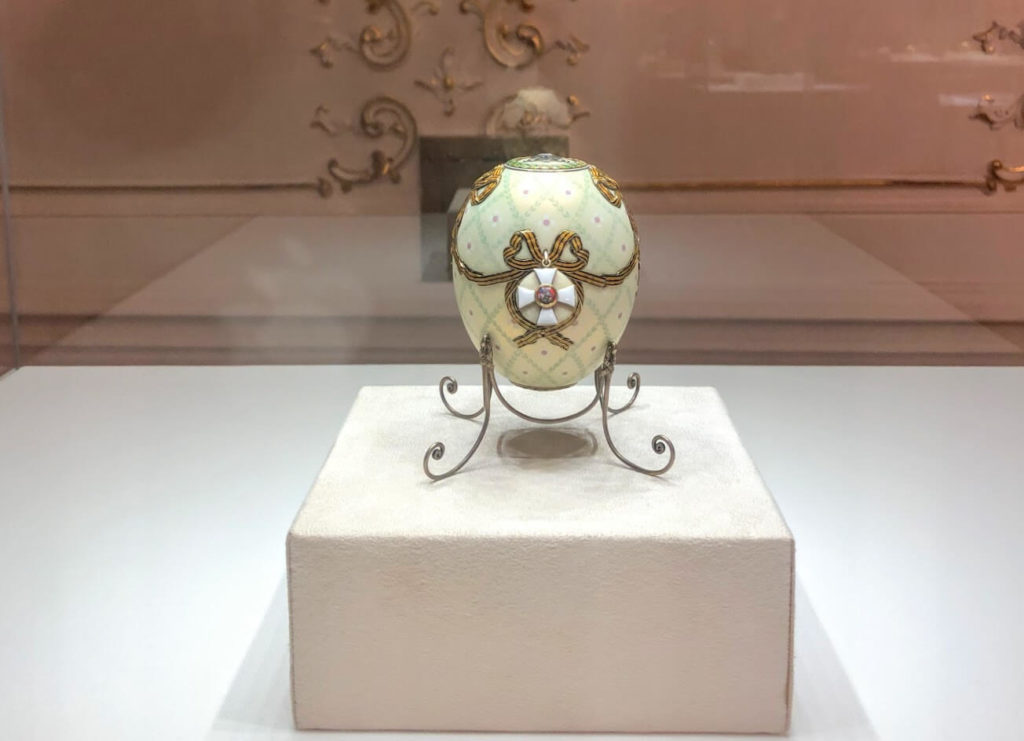 Fabergé Eggs in Paris and London

In 1900 the works by Carl Fabergé enjoyed tremendous success at the World Exhibition in Paris. Particularly for this exhibition Fabergé created miniature copies of the Imperial crown and regalia of the Russian Empire. They are now on display in the General Staff Building of the Hermitage Museum.

After the exhibition, the famous European jewellery houses created their new collections under the influence of Fabergé. While the House of Fabergé became the official supplier of all royal courts of Europe and Asia.

For instance, the British Royal family now holds the extensive collection of miniature animals and flower bouquets made from semi-precious and precious stones at the House of Fabergé. Some of the similar items are currently exhibited in the Fabergé Museum in Saint Petersburg. 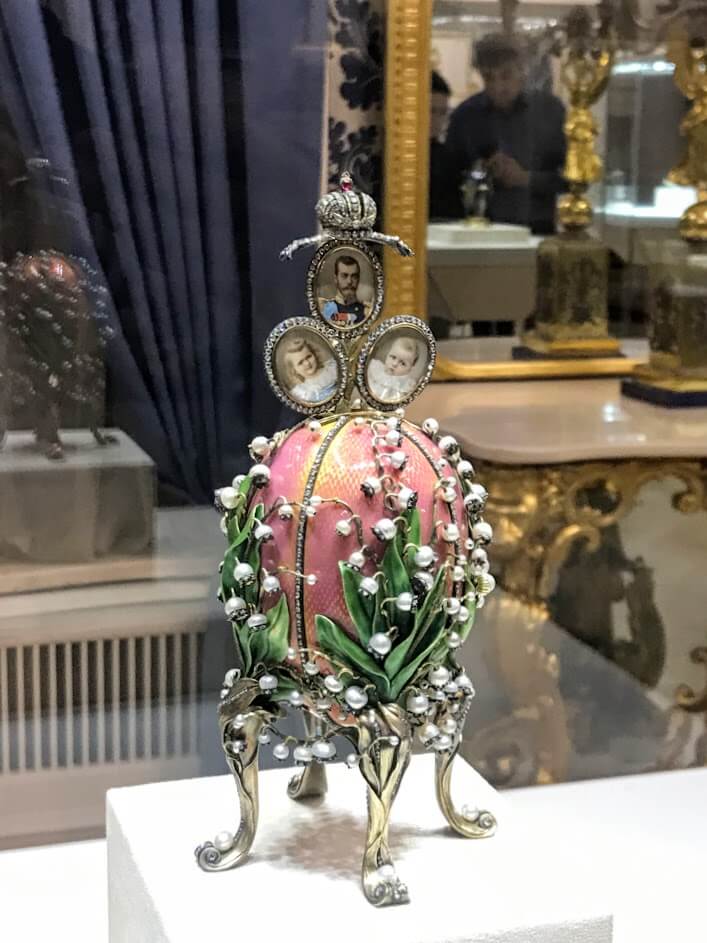 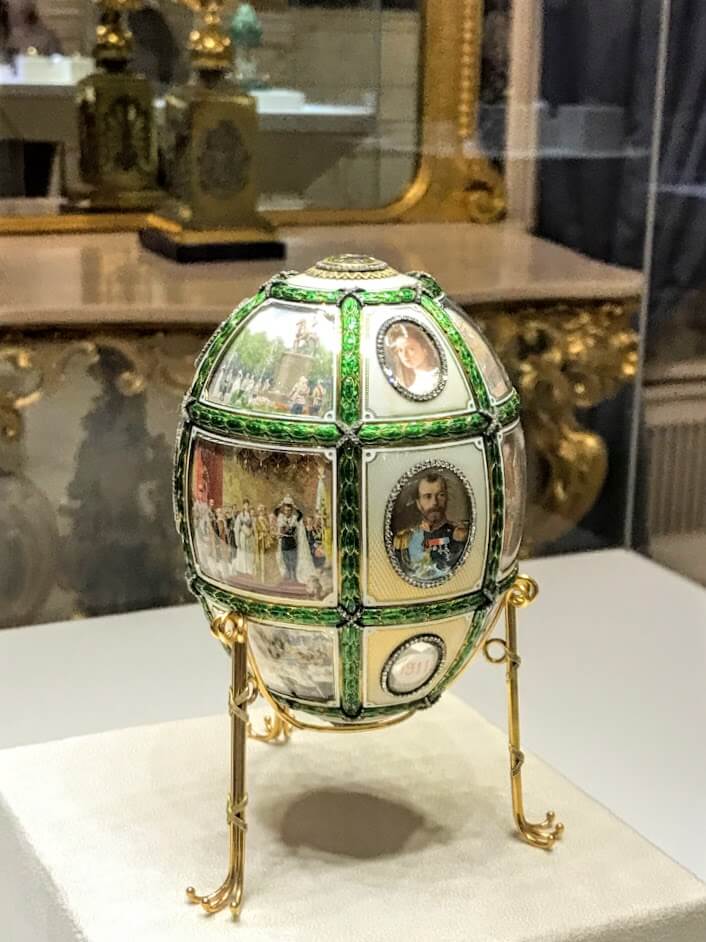 Fabergé and the First World War

The triumph of the jeweller continued up until the outbreak of the First World War. It changed the situation dramatically. So, the House of Fabergé, along with their usual orders, started to produce military awards, copper products with military symbols, camping samovars and even grenades.

*TIP: You can see some of these items during your visit to the Fabergé Museum.

In 1916, the last Imperial Egg was produced, the Order of St. George Egg, that is currently on display in the Fabergé Museum in Saint Petersburg. It was presented to Maria Fyodorovna and devoted to the highest military order of the Russian Empire. It was the only egg that she managed to take with her when fleeing the country after the revolution. 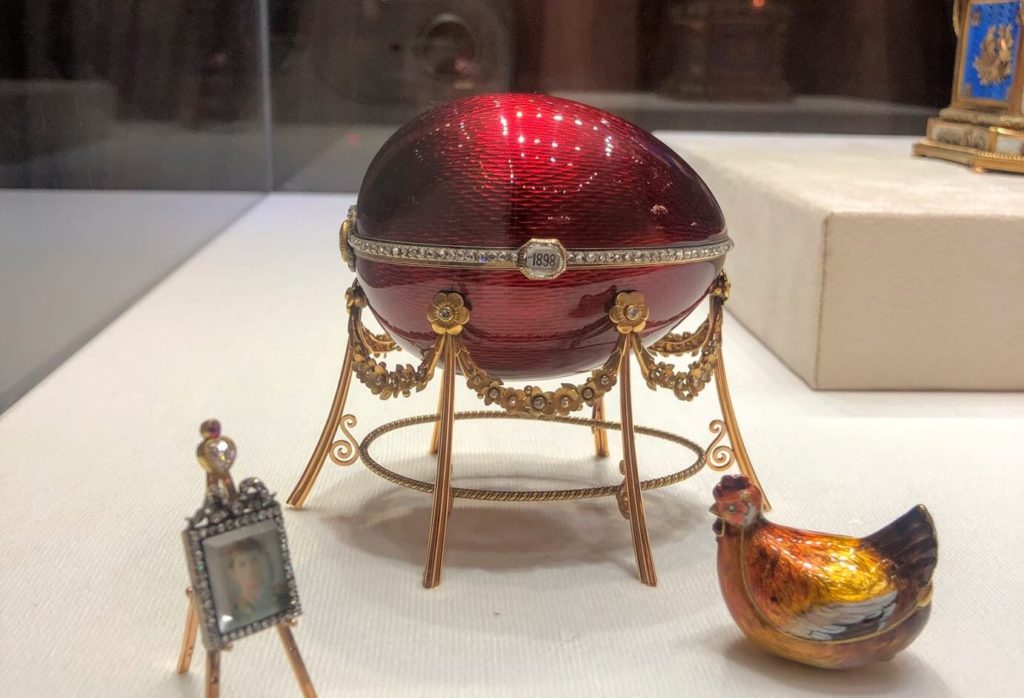 All the offices and works of the House of Fabergé were nationalized by the Bolsheviks, and many precious items were sold abroad by the young Soviet Government. They decided to collect the money for military purposes and the industrialization that way.

Only 10 Imperial Eggs were left in the country and placed in the Armoury Museum of Kremlin where they are still on display.

Carl Fabergé left the country in 1918. Sadly, he didn’t manage to take any of his precious jewellery items with him. He died two years later in Switzerland, never recovering from the Revolution of 1917. His sons, who also became skilful jewellers, emigrated and tried to continue the family business abroad, but that’s the topic for another story.

*TIP: Would you like to join a tour about Carl Fabergé and see Fabergé Eggs while in Saint Petersburg? You can book a private tour with Alexandra and Karina about his life and work, with a visit to the Fabergé Museum included, on a link above! To stay up to date with Saint Petersburg’s art events, follow them on Facebook.

Besides being amazing pieces of artistic jewellery, there is such an interesting history behind the Fabergé Eggs. If planning to visit the Russian cultural capital, be sure to visit some places where you can see Fabergé Eggs in Saint Petersburg, as well.

The post The history behind Fabergé Eggs: Where to see Fabergé Eggs in Saint Petersburg appeared first on Culture tourist.