Most visited museum in Amsterdam in 2018

The Rijksmuseum in Amsterdam is the Netherland’s premier art museum. It is devoted to several national collections — and consists of Dutch art from the earliest moments to the 19th century.

The Rijksmuseum re-opens on June 1, 2020. Timed-entry tickets are on sale, and for now can be purchased only via the museum’s official website.

Your visit is subject to the museum protocol, which lays rules and conditions.

In order to assure that visitors can observe social distancing rules, the Rijksmuseum has marked one-way routes through the museum.

The museum has also set out three main routes that will show you the best of the Rijksmuseum:

The Highlights 1 route will lead you through the Gallery of Honour and the Night Watch Gallery to the galleries of the late 17th century, the 19th-century and the Middle Ages. Taking this route, you will see the model ship William Rex, the doll houses, and paintings by Gerard Dou, Jan Steen and Berkheyde, as well as Van Gogh, Breitner and Jan van Scorel.

The Highlights 2 route will lead you through the Gallery of Honour and the Night Watch Gallery to the galleries of the early 17th century, the 18th century and Special Collections. Take this route and you will see Hugo de Groot’s book chest, paintings by Avercamp, Rembrandt and Frans Hals, as well as work by Cornelis Troost, a jewellery collection, weapons and model ships.

The Exhibitions route will lead you through Caravaggio-Bernini. Baroque in Rome, the exhibition of masterpieces by the painter Caravaggio, the sculptor Bernini and their contemporaries.

You can also visit the museum online rather than in person.

In fact, the Rijksmuseum has 10 different ways in which you can enjoy the museum and its collection from the comfort of your own home.

You can even take a virtual walk through the Rijksmuseum with Google Streetview.

The museum’s YouTube channel also provide a treasure trove of information about the museum and its extensive collection.

Video about the research and restoration project for The Night Watch

The Rijksmuseum is the most visited museum in Amsterdam — and the entire country of the Netherlands — in 2019. According to the museum 2.7 million spectators passed the entrance gates — over 490.000 more than last year.

Among other things there was a unique, temporary exhibition called, ‘All The Rembrandts‘.

Also unique: watch the restoration of The Night Watch, one of the world’s best-known paintings, live in person or online.

The Museum, which first opened in 1885, recently underwent an extensive, 10-year renovation project in which the building was restored to its original splendor. The majestic building itself is worth the price of admission, we think. The grand re-opening took place in April, 2013.

Whereas countless earlier restorations and ‘improvements’ had turned the museum into a confusing, often overly dark labyrinth, the Rijksmuseum now is an inviting, welcoming place.

The best-known paintings — including Rembrandt’s Night Watch — are easily accessible, so even a quick visit to the museum will leave you suitably impressed.

The museum also introduced a complete thematic change. Normally, museums organize their art collections by material: paintings, furniture, glass, silver, and so on. You’d view these collections in chronological order, starting anew with each type of art.

The Rijksmuseum instead has combined it collections, so that you as you walk from room to room you travel through one timeline in which the art objects are shown in context. You may see a painting of a family dining around a table, and matching dinnerware and silverware displayed right next to it. This gives the viewer an unmatched sense of time, place and beauty.

The collection focuses primarily on Dutch art from 1100 to modern times, with special attention paid to the Dutch Golden Age, which roughly spanned the 17th century.

The museum owns over 1 million art objects, but instead of overwhelming visitors with a sheer endless series of exhibits, at any given time only about 8.000 pieces are on show. Other works are rotated in special exhibitions, such as the upcoming show on the late works of Rembrandt.

This art-in-context and less-is-more approach is hugely satisfying because it leaves you in awe rather than bored and overwhelmed.

The museum has over 1.1 million objects in its collection. At any time some 8.000 are exhibited across 80 galleries.

Its gallery of prints (Dutch: prentencabinet) contains a further 850.000 works on paper.

If you don’t want to walk that much, you can take a look online: about a quarter of the entire collection has been digitized.

The Rijksmuseum’s website makes it easy to search and browse.

Moreover, the Rijksstudio allows people to collect and share images, or even to use them to create posters, Ipad covers, and so on.

The collection was started when William V started acquiring pieces just for the hell of it, and has been growing ever since: it now includes Dutch paintings from the 15th century until around 1900, as well as decorative and Asian art.

But if you have only a limited amount of time, head for the Dutch Masters section on the top floor. Here’s where you’ll find Rembrandt’s Night watch, the jewel of the museum’s collection, and Johannes Vermeer’s The Kitchen Maid and Woman Reading a Letter, each capturing a moment in the life of a woman from a different background.

There are also excellent selections of works by the likes of Frans Hals, Jan Steen, Jacob van Ruysdael and Ferdinand Bol.
– Source: Time Out Amsterdam (Quoted from an earlier edition)

The Rijksmuseum also has fascinating collections of silverware, porcelain, 17th- and early 18th- century dolls’ houses, and furniture that shows what canal-house interiors looked like.

If you think the building looks familiar, that is because it bears a striking resemblance to the Central Station. Pierre Cuypers designed both. The Rijksmuseum opened in 1885, and Central Station opened just four years later.

The Rijksmuseum has recently undergone a ten-year long renovation during which much of the layout was re-designed. If you have ever visited the museum before – and got lost in its labyrinthine innards — you understand why this was necessary:

The New Rijksmuseum’s mission is to give visitors from all over the world a representative overview of Dutch art and history from the Middle Ages through the 20th century, and to present important aspects of European and Asiatic art. In order to meet this aim, a resolution to effect a comprehensive renovation of the Rijksmuseum was adopted by overwhelming majority in the Dutch parliament in 1999.

Since the opening in 1885, architect Pierre Cuypers’ monumental building has been adapted and extended many times, making this renovation a necessity. All these changes to the original structure — a richly decorated, open, inviting and easily navigable building — turned the Rijksmuseum into a labyrinth of galleries, which visitors found difficult to navigate and where the collection could not be exhibited under optimal conditions.
– Source: Rijksmuseum, Final Design

The result is a building — magnificent in its own rights — that is a pleasure to visit.

Most visited museum in 2018

The Rijksmuseum in 2018 attracted 2.3 million visitors. That is an increase of 9.5 percent compared to last year (2.1 million).

This marks the sixth year in a row that the museum has delighted over two million people.

After its re-opening, in 2013, the museum expected to see 1.7 million visitors a year.

Last year the museum ranked in second place while the nearby Van Gogh Museum had a banner year with 2.26 million visitors.

In December 2015, news media reported that the Rijksmuseum is in the process of changing ‘racially-charged titles’ of works of art in its collection.

The Rijksmuseum is in the process of removing language that could be considered offensive from digitized titles and descriptions of some 220,000 artworks in its collection. Words that Europeans once routinely used to describe other cultures or peoples, like “negro,” “Indian” or “dwarf” will be replaced with less racially charged terminology. 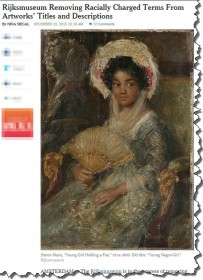 “The point is not to use names given by whites to others,” Martine Gosselink, head of the history department at the Rijksmuseum, who initiated the project, said Thursday. For example, she said, “We Dutch are called kaas kops, or cheeseheads, sometimes, and we wouldn’t like it if we went to a museum in another country and saw descriptions of images of us as ‘kaas kop woman with kaas kop child,’ and that’s exactly the same as what’s happening here.” […]

“Some people are angry with us,” she said. “They say ‘Why this change, the Rijksmuseum is trying to be so politically correct.’ But in the Netherlands alone, there are a million people deriving from colonial roots, from Suriname, from the Antilles, from Indonesia, and so on that basis alone it’s important to change this.”
– Source: Nina Siegal, Rijksmuseum Removing Racially Charged Terms From Artworks’ Titles and Descriptions, The New York Times, December 10, 2015

Busiest months and days at the Rijksmuseum

Busiest months: April, May and August — with a 20-30 minute line at the ticket office.

Purchase your Rijksmuseum tickets ahead of time.

You can also combine museum entrance with a canal cruise