Before the new Amsterdam South-North metro line was opened in mid-2018, a ferry was the only way for cyclists and pedestrians to travel to and from Amsterdam Noord neighbourhood. One of those daily commuters was an artist Rachelle Meyer. During a short 15-minutes ride she made numerous sketches of her fellow Amsterdammers. Drawings from her sketchbook became large prints and a lovely ode to Amsterdam life.

Amsterdam Noord (North) was an industrial area of the city during the 19th and beginning of the 20th century. Many old factory buildings and the vast areas, that are so unusual for Amsterdam, could still be found there. However, during the last few decades, the neighbourhood got an artistic vibe, with many murals, creative co-working spaces and artist studios. 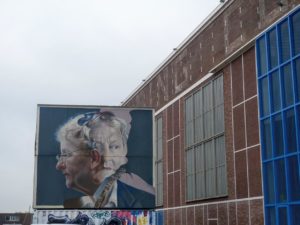 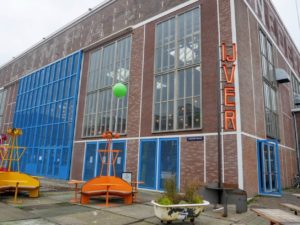 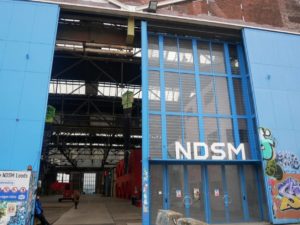 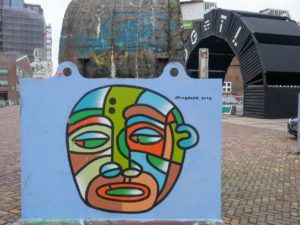 Rachelle Meyer’s ‘Faces on the Ferry’

A few days ago, I visited one of those spaces, NDSM FUSE where Rachelle Meyer’s exhibition ‘Faces on the Ferry’ was on display. I knew the work of this fantastic Amsterdam based illustrator and artist from before. But seeing all those colourful prints in front of me, gave them a completely different appearance. I’ve explored the exhibition with Rachelle, who told me more about it. 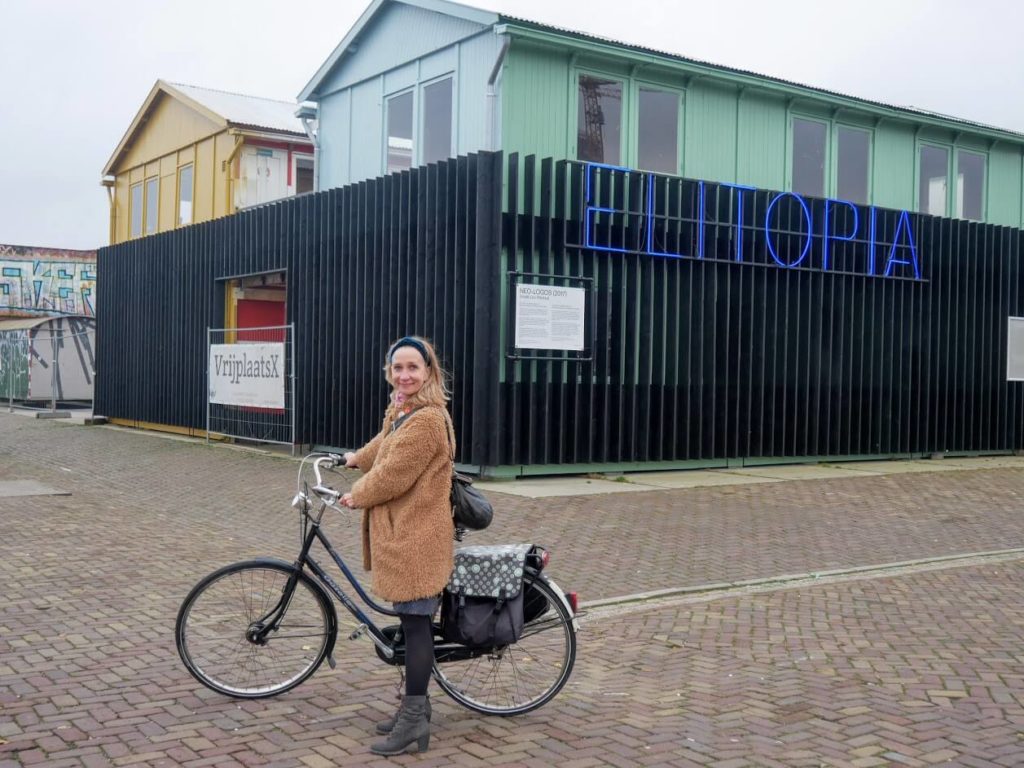 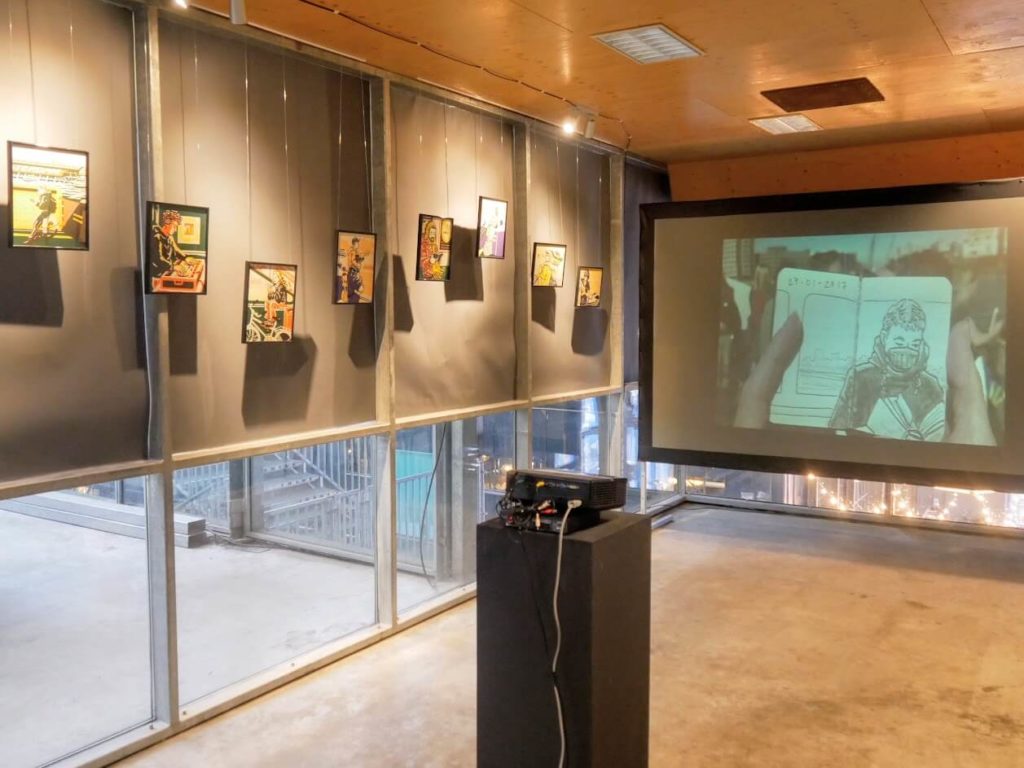 How did you first get an idea to draw people on a ferry?

It began very small… literally, in a palm-sized sketchbook. I went to the Frankfurt Book Fair in Germany in 2016 and started drawing other visitors hunched around the wi-fi spots between appointments. It’s a huge international event, but I only saw other faces like mine – white, of European descent. I made a point of searching for diversity in other halls that I otherwise never would have visited. So when I found this tiny sketchbook at an art supply store shortly after that, I thought, “I want to fill this book with faces.” I wanted to continue that adventure. The ferry was the perfect place to do that.

What were some of the most interesting situations you’ve encountered while making sketches on a ferry?

I had a group of Eastern European tourists accuse me of working for the KGB because I was observing them and scribbling in my little black book! It was just a joke, and we had a good chat together about what I was doing and good places to visit in Amsterdam. 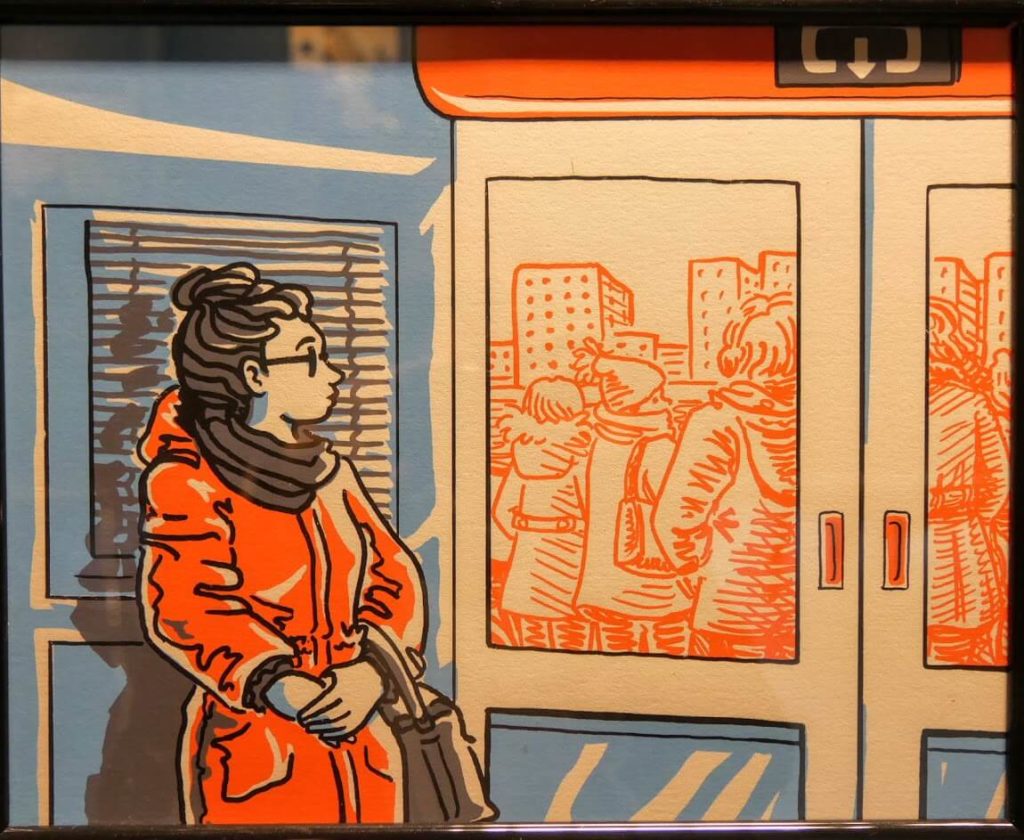 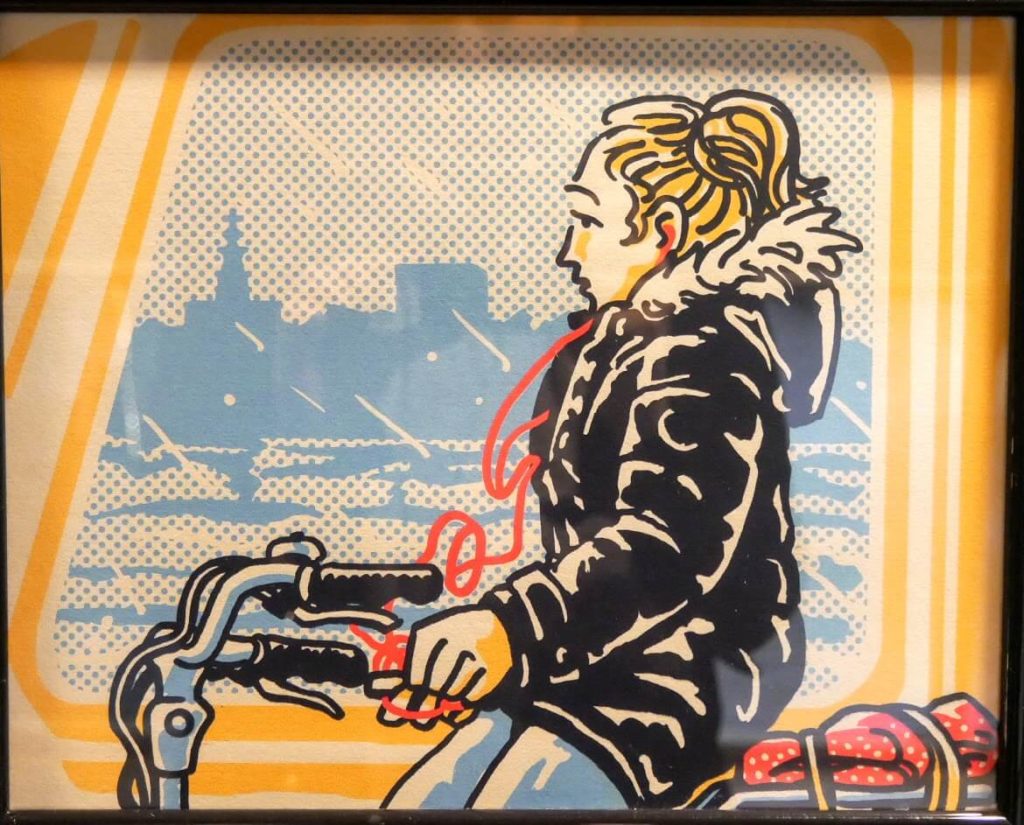 Can you explain a bit about a technique you’re using to transform your sketches into the prints?

As an illustrator, I’d been yearning to push my style further and really develop my expressive line work and limited colour palettes. So I took the little sketches as a basis for content and developed them as silkscreen prints. The printing technique forced me to be very decisive and bold about line and colour. Screenprinting also worked into my concept of showing time in a micro and macro form. We see how people spend their time on the ferry, but we also feel the seasons change throughout a year. I used a four-colour palette for each season, and one colour would carry through to the next. This creates a flow when all the works are displayed together.

Do you know if any people you’ve portrayed are aware they are on your prints? Or do they even own them?

Yes! I drew on the ferry during Museumnacht, and I contacted the DJ I sketched during the event to let him know that it was turned into one of the autumn prints (The Night Ferry). I gifted it to him at the exhibition opening. There’s another “model” (Dedicated Reader #4) who still hasn’t picked up his print, but we’ve been in touch. 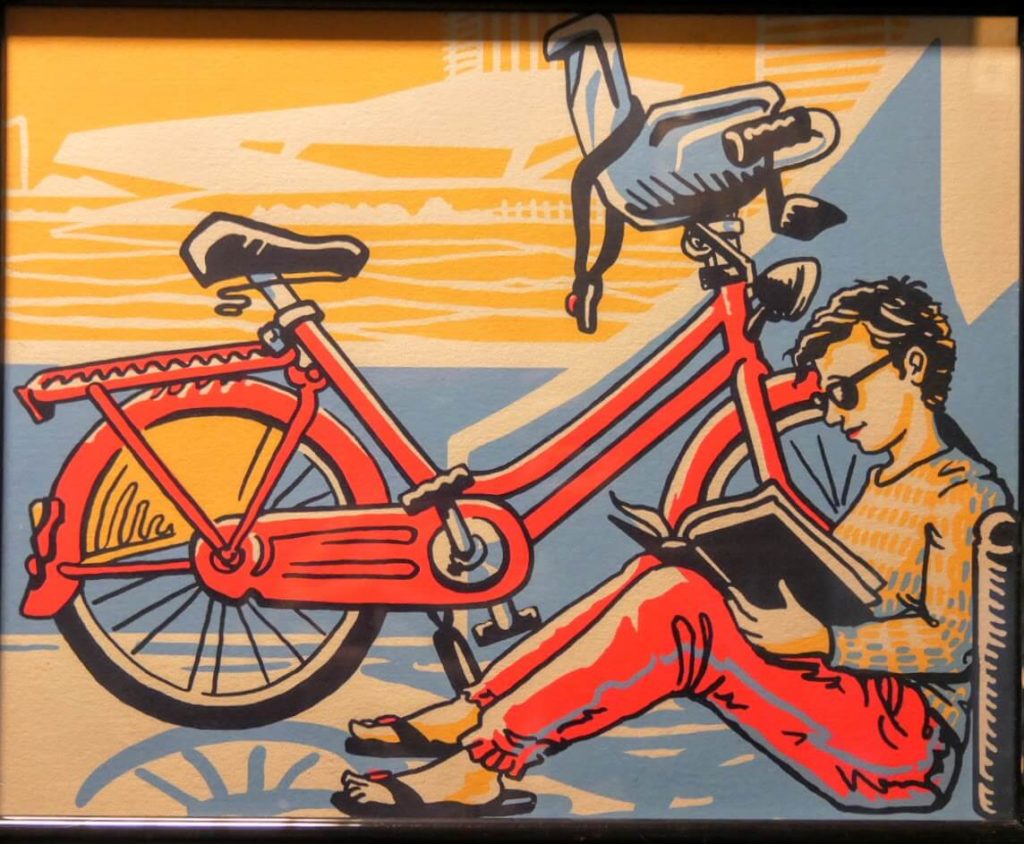 Are you planning to continue capturing faces on the ferry? What are some of the future projects you will be working on?

I really miss drawing every day and hope I can find time to do that again soon. I expect a second exhibit of the Faces on the Ferry installation in 2020. I’m catching up with some necessary administrative work, balancing my subsidy budget and updating my webshop. I have assignments and commissions to fulfil, including illustrating a story for the next Chad in Amsterdam comic, which I’m really looking forward to. I already have a concept for another art project, but you’ll just have to keep your eye on my channels for the full announcement of that one. A little teaser – it has to do with black swans and migration. 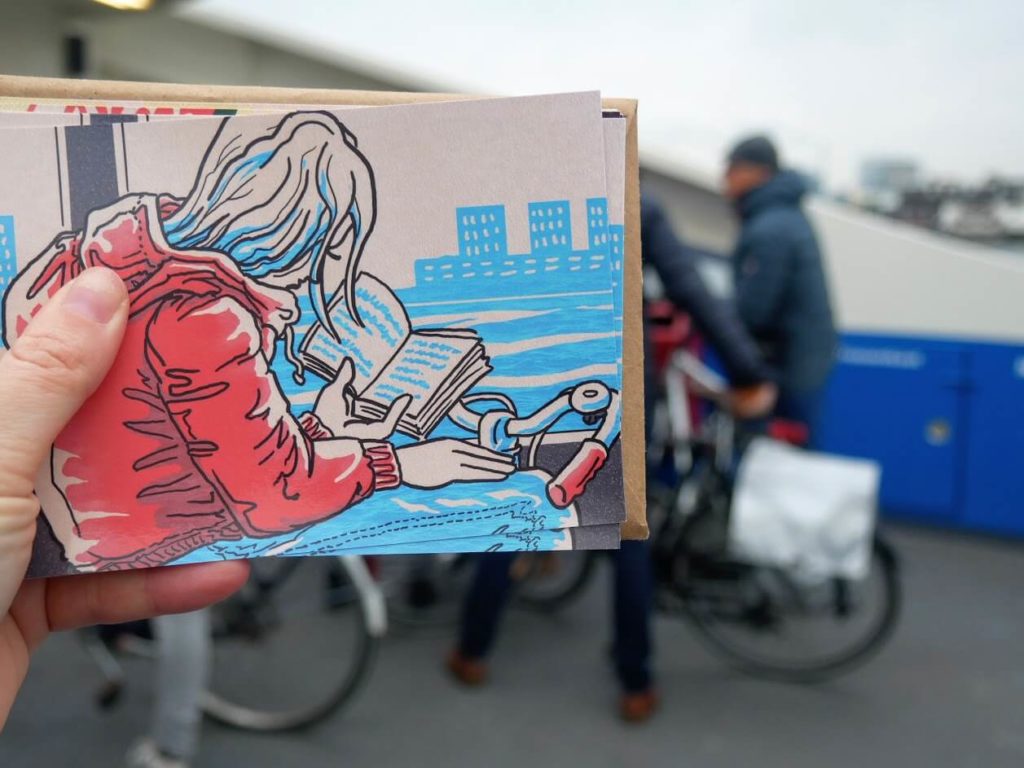 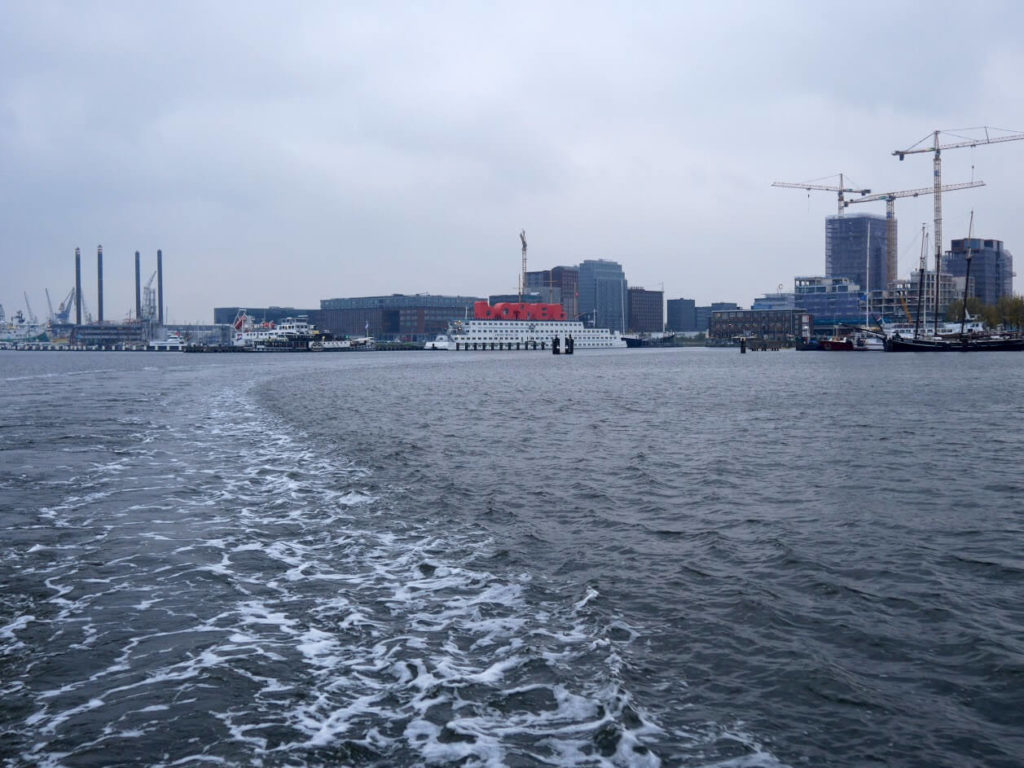 After saying goodbye to Rachelle, I took a ferry back to Amsterdam Centraal. And while the boat was leaving Amsterdam Noord, I looked to the people around me, trying to find some of the familiar faces from Rachelle’s illustrations. Her way of documenting people in Amsterdam and those every-day-life situations, like commuting on a ferry, and then creating some beautiful art out of it, is something so impressing about her work.

Etsy Shop: Here is the link!