Have you ever been to some of the First World War trenches? Or do you have an idea what the ‘trench art’ is? Although I’m not a huge First World War enthusiast, spending a weekend in Ypres definitely sparked an interest to learn more about that dark period of the world’s history. And we decided to explore it more by visiting Hooge Crater Museum, one of the most interesting First World War museums in Flanders.

Hooge Crater is a privately owned museum dedicated to the First World War. It’s located some four kilometres (a bit less than two miles) from Ypres, in a small village called Hooge. It’s a great idea to go on a short trip there if you’re visiting Ypres. But, it’s also easily reachable from anywhere in Flanders. Being voted the best private museums in Flanders Fields and with its exhibition nominated for the Heritage Prize of the province of West Flanders, it’s a museum you definitely shouldn’t miss while visiting that region of Belgium.

⤷ Read more about my weekend in Ypres on a link here 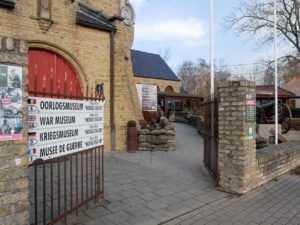 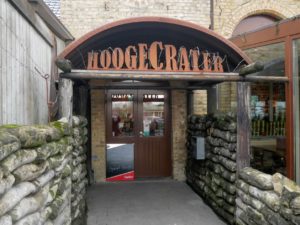 How to get to Hooge Crater Museum

Hooge Crater Museum is located in Flanders at the western part of Belgium, very close to the town of Ypres. If you are staying in Ypres, you can easily visit it by car. You’ll need only around ten minutes to get there. There is a parking space available on the road in front of the museum where you can leave your car free of charge for a few hours.

Flanders is also an excellent area for cycling. So, if you’re going to visit it that way, you can leave your bicycle in front of the museum at the large bicycle parking area. It even has an electric charging point (handy if you’re coming on the electric bicycle).

What to see at the Hooge Crater Museum

Dedicated to the Great War, Hooge Crater Museum has a vast collection of weapons and uniforms belonging to all armies involved in the First World War. Together with photographs and documents from that time, it will give you a good overview of all the aspects of life the war has impacted.

The Hooge Crater Museum exhibition also includes some lifelike reconstructions of the war scenes, that are a great way to understand how the life of soldiers really looked like. From the ambulance vehicle with wounded soldiers in the back to the life in trenches and a reconstruction of the red Fokker DR1 plane with three sets of wings, they all make First World War coming to life. 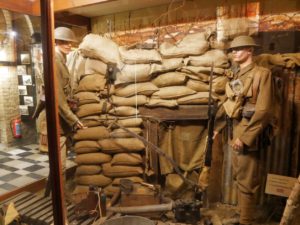 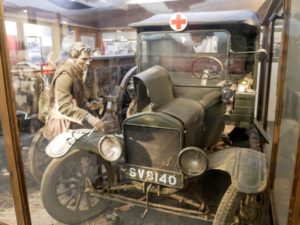 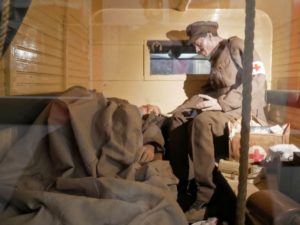 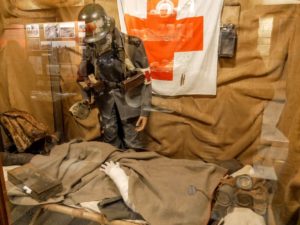 However, equally impressive as its collection, is the story of how the museum was founded. Located in the old church built shortly after the war, in the 1920s, the museum was opened in 1994. The church was in bad condition when it was bought by the family De Smul – Ceuninck at the beginning of the 1990s’. They thoroughly restored it and opened a museum there a few years later.

The remains of the First World War are still visible in the fields around the village of Hooge, and people working in the fields are often finding bullets, weaponry and other things that used to belong to soldiers. Current museum owner Niek, who bought the museum together with his wife Ilse Benoot – Watteyne in 2009, first got fascinated by the First World War while helping at the farm as a little boy. This is where he found some of the war artefacts and started creating his own small collection. That will a few years later became a basis for the current exhibition at the Hooge Crater Museum.

That charm and passion Ilse and Niek are giving to this fantastic First World War Museum is something that’s often lost in the large museums. Meeting the owners and listening to their stories and explanations about the First World War is something that definitely sets this place as one of the best museums in Flanders. Well, you can see it for yourself in this short video here. 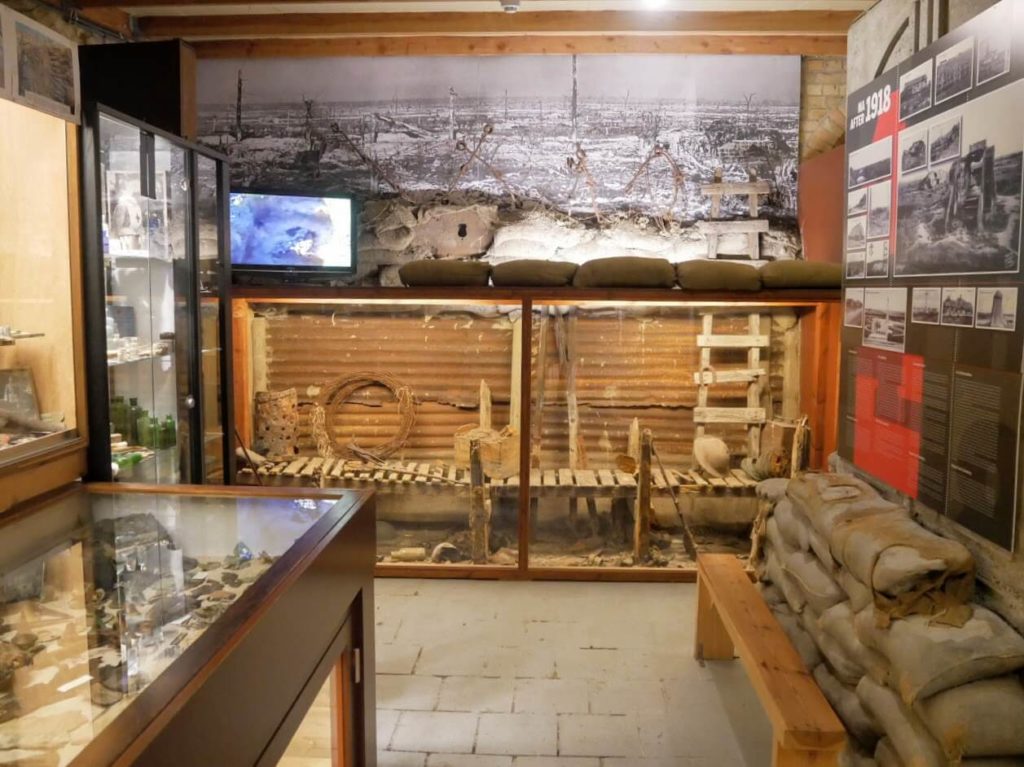 Next to the church in which the museum is, a former village school is located, which today houses the museum cafe. It’s a cosy place perfect for a break after exploring the museum or cycling form Ypres. They are serving Flemish specialities and some great local beers there. It’s called the Theme Cafe because it’s dedicated to the theme of the First World War, as well. And I was utterly amazed by the ‘trench art’, hammered shell cases on its walls. Waiting in the trenches could have been quite long and tedious, so some of the soldiers would use that time to create art of the shell cases. It was also interesting to see some of the First World War propaganda posters there and travel back in time that way, too.

*TIP: In any case be sure to have a break at the Theme Cafe, enjoy in some local food and beers, and relax a bit before continuing with exploring the area around the museum. Get a combi-ticket for 12 euros that includes entrance ticket, lunch and one drink! 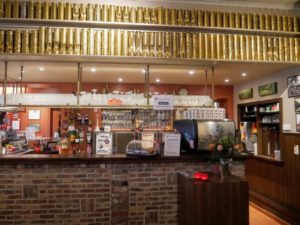 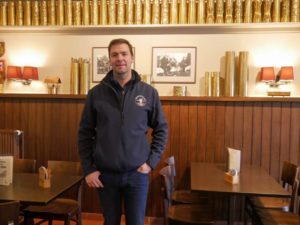 Exploring the area around the Hooge Crater Museum

There is a map of the area in front of the museum where you can learn more about where the trenches were, locations of British and German soldiers and other interesting sights in the area. Just across the street is the Hooge Crater Cemetery where the soldiers who died during the war in the area were buried.

We took a walk behind the museum where some of the trenches could still be seen. We were able to enter them, and I had such divided feelings while standing in some of them. It was really claustrophobic, humid and unpleasant being in them. I can just imagine how it must have felt waiting in trenches for months to some of the soldiers who fought in this area. We’ve also seen a difference between the German and British trenches. And were utterly amazed by how close to each other their trenches were. They could literally throw a stone (or something else) from one another. 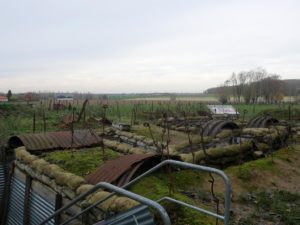 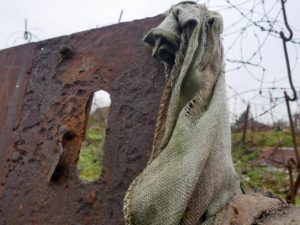 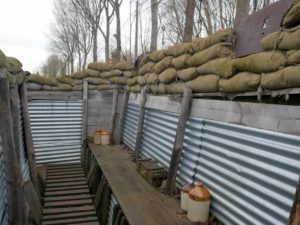 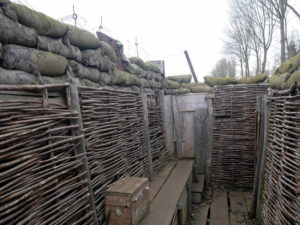 Then we took a walk further more into the fields where the battlefield was. And it was amazing to still see some huge craters in the land caused by the bombs exploding more than a hundred years ago during the First World War. Being in the landscape still shaped by one of the deadliest wars in human history, made it just more real to us.

This is a war museum, people come here to discover World War One. But by the time they leave, we hope they will discover the importance of peace. Show them what happened, so it won’t happen again in the future.

We left feeling exactly the way the museum owner Niek Benoot described what he wants the visitors to understand after the visit. It’s so important to visit this kind of museums, reminding us of how deadly destruction and war are. And that usually, innocent people are the victims in them. 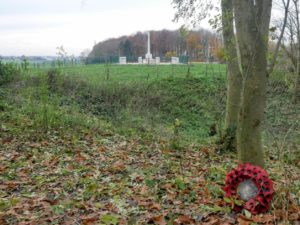 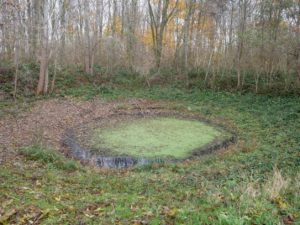 *TIP: Just a few steps behind the museum a lovely Cottage de Vinck is located. It’s a historic guest house, perfect accommodation if you’d like to spend more time in this area. Check out the link here for more info.

Absolutely! We visited the Hooge Crater Museum with our five-year-old son, and we all enjoyed it. We did prepare him before, telling him what the war is and reading some children books about the war and sieges. So, when we were there, he was impressed by the trenches, ambulance vehicle and a Fokker plane.

He also got a colouring book and some crayons while we were waiting for lunch at the Theme Cafe. So, he was busy colouring while we talked about all the fascinating history we just learned about during our visit.

Our visit to the Hooge Crater Museum was absolutely one of the highlights of our weekend in Ypres. We loved learning more about the First World War, listening to the real stories of people experiencing it and realising the importance of peace once again.

*We visited Hooge Crater Museum during our weekend in Ypres organised by Visit Flanders. Many thanks to them, Ilse and Niek Benoot – Watteyne for welcoming us, showing us around and making our visit to their charming museum one of our favourite experiences of the whole trip. Of course, as always all opinions are my own.